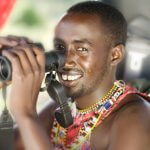 Rain on the parade
Spot of the Week
S.A.F.E travels

In a break with 15 years of ‘Spot’ tradition, today’s issue does not deal with animals. The custodians of the Mara are Masai. Women as well as men. Sadly, like many areas of the world, they are afflicted by the barbaric practice of F.G.M.

There is no way to sugar coat the full horror of this. It is by no means exclusive to the Mara as in England and beyond, there are hundreds of thousands of instances of this savagery each year.

Kicheche is proud to be working with S.A.F.E., an organisation determined to stamp this out. They have considerable success in some parts of the Mara and last week their roadshow came to Talek.

Seven Kicheche guests drove to the show after lunch. All had had blistering game drives that morning and were very chipper on arriving. A while later they drove back, there was not a sound for the whole journey.

What the S.A.F.E.team are doing is the work of heroes. Amos was painstaking in his
efforts to explain and translate the Maa show, of how it was acted out like an opera: half of the act wanting the ceremonies to continue, the other half finally prevailing in their efforts for justice. All the performers were as humble as they were passionate. It was frankly overwhelming.

There are countless stigmas attached to F.G.M, yet there is moral clarity: it is wrong. We are proud to be supporting SAFE and will continue to do so.

Nick, we thank you for the invite and are happy to have sponsored the show. We are sorry there were no other tourists there. Each year ‘cutting crews’ all over the world continue to butcher young girls, next year, thanks to S.A.F.E. there will be less young blood spilt in the Masai Mara.

Paul Goldstein’s annual charity wildlife lecture at the Royal Institution: ‘Endangered’ will split the proceeds between a tiger charity and SAFE. Click here for details.